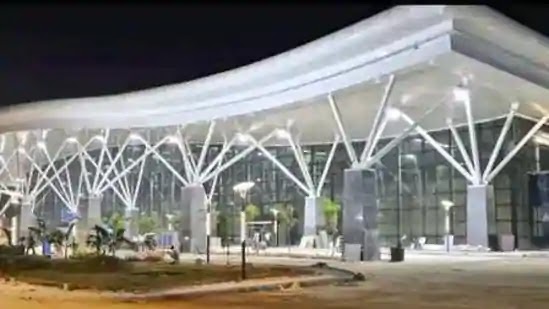 Goyal tweeted on Thursday and shared photographs of the station, "Have a glimpse of the upcoming Sir M. Visvesvaraya Terminal in Bengaluru, Karnataka, equipped with state-of-the-art facilities".

The Sir M Visvesvaraya Terminal railway terminal has seven platforms with escalators and lifts linking each of the platforms for easier passenger movement. A foot over bridge and two subways have also be added for a better connection between the platforms. The 4200 sq. meter station construction, which has cost ₹314 crore, will serve to a daily footfall of 50,000. Fifty trains can be operated from the terminal on a daily basis.

The photos shared by the minister show the luxurious interiors of the railway terminal, railway lines, the stylish and sufficiently broad foot over bridge and the entrance of the terminal. The terminal, built to fit the comfort of Bengaluru airport, will also have a VIP lounge, upper class waiting area, digital real-time passenger details, food court and a water recycling plant with capacity of 400,000 liter.

As many as 250 cars, 900 two-wheelers and 50 auto-rickshaws, including five buses of the Bangalore Metropolitan Transport Corporation (BMTC) and 20 taxis can be accommodated in the large parking area.

The KSR Bengaluru City and Yeshwantpur terminals are currently operating 164 express trains and 109 pairs of passenger trains, said the Mint, adding the new terminal, approved in 2015-16 is projected to ease out the load and aid South Western Railways in increasing the service of trains from Bengaluru.

It is truly said, India is so diversified in topography and in culture but it is also intrigued with unity as well. This time the Etrains team has explored the 5 best cities where you can celebrate the manifolds of festivals. 14 January 2018 is an auspicious and a pious day in all the part of the country. if Punjab celebrates  Lohri  with a bonfire then none the less People takes a holy dip in Allahabad . So, lets take a look on 5 cities, where these festival are celebrated at its best and may be we you can make a weekend get away to join the zeal. 1. Pongal:  This is a four-days-long reaping festival celebrated in Tamil Nadu, a southern part of the country.  Pongal, one of the most special and famous Hindu festivals of the year. It is basically the thanksgiving to nature that it give us so much without asking it back. If you are travel south or Tamil Nadu during Pongal, then  Pollachi  is one of the best place to celebrate. It is located at a distance of just 44 km
Post a Comment
Read more